The Story of Monroe — Part 1 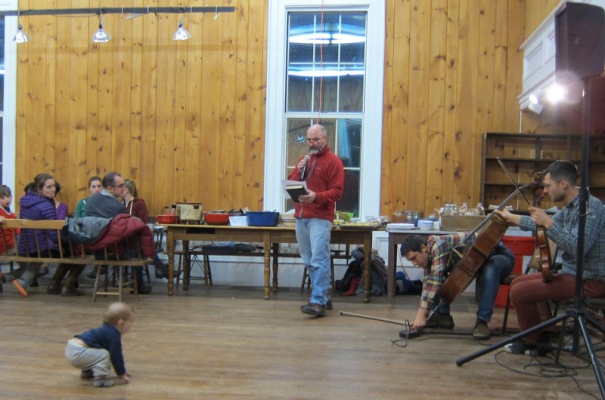 [The following is a synopsis of a short-talk given by Eric Rector at the Monroe Bicentennial Kick-off Dance held Saturday, February 3rd, 2018. He would like to thank the help of other Monroe historians for their contributions: Guy Sanderson, Charlie Biebel, Norma Whitman, Paul Jacobi, and all the folks at the Town Office who made the Archives available.]

The Story of Monroe is actually the story of citizen landowners who were freed to pursue their own ideas of sovereignty and economics. It is, truly, the story of the United States experiment writ small: at the scale of 39 square miles.

After all: who owned the trees and mountains of Monroe before the Revolutionary War? The King of England. Land was “owned” by only Kings and Queens and sometimes religious leaders, and only those monarchs could grant other people the right to work on the land. Monarchs could give AND withdraw land rights, and this gave them the power to reward their allies and punish their political enemies. Land “ownership” was really just a cascading set of sub-leases beginning with the Monarch or the Pope and leading down to Princes, Cardinals, Dukes, Viceroys, Bishops, etc. An individual could NOT actually “own” land unless they were already a monarch, or until that individual became a monarch through succession or through violence on the Old Order.

That’s basically what happened in the American Revolution: a group of nobles in the British Colonies committed violence on the Old Order and re-allocated the control of the land that had formally been simply Colonies. Instead of appointing a King landowner in the usual manner who would then share that land among the new nobility, the United States tried something different. After all their rebellion had already been formed under some pretty radical ideals about self-determination and freedom.

At the same time the now independent United States government was in a bind. It had promised to pay the citizen army that defeated British rule with money it did not actually have. What this new nation did have, in apparent limitless abundance, was land stretching all the way west out to the Mississippi River. So this new nation began distributing actual ownership of unsettled land to its soldiers who would, in turn, be able to sell title to that land to ANYONE, or settle it themselves.

That brings us to a moment in 1798 when a man named Adam Coulliard decided to move his family into the unsettled area west of Frankfort. Couillard’s impulse — to move west into The Wilderness (which as we all know was already well used by the Native Americans in the area) to create a life on land that he could buy and sell — is the same impulse that populates America’s frontier starting in Ohio, Kentucky, and Tennessee, then later Iowa and Wisconsin, then Nebraska, Colorado, and finally all the way to the Pacific Coast. The land that Couillard chose to settle on had originally been given as part of a huge land grant by the new government in Philadelphia to General Henry Knox, hero of the Revolutionary War, but which Knox had recently sold to a Boston land agency for further subdivision and sale as individual lots. (Those land agents names included Thorndike, Sears, and Prescott…)

Couillard chose a spot in the woods near a roaring falls on the Marsh Stream to build his log cabin, and his son, Oliver, was born in that cabin in the same year. About a year later Adam decided to sell his cabin to another settler, Broadstreet Mason, who was a soldier in the ware serving in the 2nd NH Regiment. Mason was specifically looking for areas where he could build and operate mills. This site — just across the Marsh Stream from downtown Monroe today! — must have been very promising in his eyes because he built a carding mill (for processing wool) and several lumber mills. For a long time the area was actually called “Mason’s Mills.”

(By the way: although Adam moved his family to Bucksport after he sold his cabin to Mason, Oliver Couillard eventually found his way back to Monroe proper because several of his own children’s births were recorded in Monroe, and Oliver Couillard died in Monroe in 1885!)

After being formally incorporated as “Lee Plantation” in 1812 by the Massachusetts legislature, on February 12, 1818 Monroe was incorporated into a Town of Massachusetts and named after the newly elected fifth president of the United States.
Why named after President Monroe? That’s a terrific story, and to do it justice I might have to write a long rap musical performing James Monroe’s life and his vital importance to the founding of the United States. I can sum it here by pointing out that the War of 1812 with Britain — their last gasp to reclaim the Colonies — had finally ended on excellent terms for the United States. James Monroe had a lot to do with both ending the war AND the good terms on which it had been ended. The economy boomed and this triumphant moment — at the time referred to as “The Era of Good Feeling” — led to Monroe being elected President by the appointed Electors who traveled to the newly created Washington D. C. to cast their votes.

(Of course, Monroe was also a hero wounded at the Battle of Trenton, one of the first Governors of Virginia, the man who negotiated the Louisiana Purchase – lots more land! — for then President Jefferson, and he may have single-handedly repulsed the invasion of British troops in Baltimore after the British had burned Washington D.C., among many other amazing feats that led him to be called “The Last Founding Father.”)

Immediately after Monroe was inaugurated he chose to leave the safety of the White House and travel out and visit all of the new territories that were now officially a part of a growing nation. As he initially sailed north up the Atlantic coast stopping at towns and cities along the way he ended up in Portland, Maine before turning west over land. It’s entirely likely that one or more Monroe citizens took a schooner down to Portland to see if this new President was human, or some shining being, in much the same way that Elizabeth Lyon did when he visited New Haven, Connecticut. She later wrote to her sister:

“The President of the United States is in Higginses Store, and I am looking at him and strange to tell he has got arms, and legs, and can walk and talk – and appears very much like other men that he is with – only much more plain.”

So the Story of Monroe begins with the post-revolutionary story of westward expansion – albeit expansion that stopped just a few miles outside of Frankfort. Still, it encompasses the story of settlers (including their interaction with the already resident Native peoples), and agriculture, and celebrating heroes, and of residents relentlessly practicing democracy at Town Meeting every year for two hundred years. Later stories will be told about Monroe industries that grew and collapsed, the population peak of 1703 residents in 1860 and the valley of 478 residents in 1970, the dairy farming that continues up to this day, and who we are today. Stay tuned…

Pivot point for this idea

Tagged with: Bicentennial
Posted in History

This site uses Akismet to reduce spam. Learn how your comment data is processed.

Conservation Commission
1st Monday @ 6:00pm
(If this is a holiday then the meeting will be the following Monday)